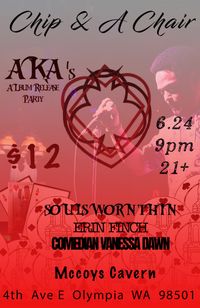 JUNE 24TH 12$! Olympia's very own AKA will be dropping his very much anticipated album "Chip and a chair" at McCoys cavern. This full length album is his best work to date and comes off as a secret admirer letter sent to the city of Olympia. In this album you will witness him parallel his journeys of freeing himself from Alcohol with his journeys of following his dreams. With Smoke from Old Dominion on production once again the duo is poised to flip Olympia on its head with sultry bangers, vulnerable soliloquys in what AKA hopes to be one of the best releases in Olympia history. we also have a star studded non genre specific opening line up! AKA- Is a 38 year Olympian who has been playing Music locally for 20+ years. His Blend of Conscious Hip hop and instrumentals from Smoke of Old Dominion provide for a very deep felt experience that leaves audiences feeling vulnerable yet safe. A formula AKA holds to the brightest of lights and makes him a local favorite, he tackles concepts that stand the test of time and always tend to have an overall positive yet not naive attitude to his approach. From up beat to down trot you will be certain to find a piece or two that will speak to you and the vibration frequency stays uplifting. His lyrics paint pictures with abstract cadence and lyrical landscapes. You will see the words take shape right in front of your ears and will leave with something tangible to take home with you. Follow AKA on his journeys on IG @Landshark_360 and check his last project at https://akahhg.bandcamp.com/album/put-on-blocks for a sneak peak! Erin Finch is an Olympia native singer-songwriter who has performed in the area for nearly a decade. Having spent many years playing with local Irish traditional group The Burren Band, Erin is now showcasing an all-original set of music featuring guitar and vocals. These songs and guitar arrangements are inspired -but not defined- by Irish and American folk music tradition, blending joyful exuberance with bittersweet melancholy.

Vanessa Dawn is a comedian from Tulsa, Oklahoma now living in the Pacific Northwest. Her relaxed comedy style sneaks up on you like an unmarked car at a DUI check point. She has performed in the Seattle International Comedy Competition, Blue Whale Comedy Festival, NW Women's Comedy Festival, NW Black Comedy Festival, and performs at clubs and casinos throughout the NW. Souls Worn Thin is the contrivance of former Deepwater guitarist Stephen Wayne. Melodic rock/punk simmered in the grungy footprints of the Puget Sound. While SWT may not fit neatly into a single genre, they deliver an almost tangibly NW feel that vacillates between aggressive and cheeky. SWT offers a scathing rebuke of manufactured division permeating society with the same ferocity they rebuke craft beer. A three piece (for now), SWT drummer Josh White (formerly of Lit End) is a heavy hitting all out beast on the kit. Guitarist turned bass player Cody Sanders (formerly of The Stravinsky Riots) came into the fold about ten minutes before Souls Worn Thin headed to Magic Mix studio to record their debut album “Kill Your T.V.” The lost year of 2020 for music in the Pac NW turned out to be a gift for the newly formed band. Whilst the venues were on lock-down, Souls Worn Thin was busy working on their first album. Named after the title track, “Kill Your T.V.” was released on September 15th, 2021. The local scene has a heavy influence on the guys. They try to get out to as many other local band's shows as often as they can. The scene took quite a beating during the last garbage sauce of a year; it's important to go to the shows, buy that band's t shirt, and over-tip your bartender. This freshman offering is energetic, lyrically biting but snarky, and messy but motivated. The guys are already fleshing out the early stages of their next album which they plan to record back at Magic Mix Studios with the incomparable Daum Duo. Hope to see you all out! Stay tuned for Raffles and prizes!